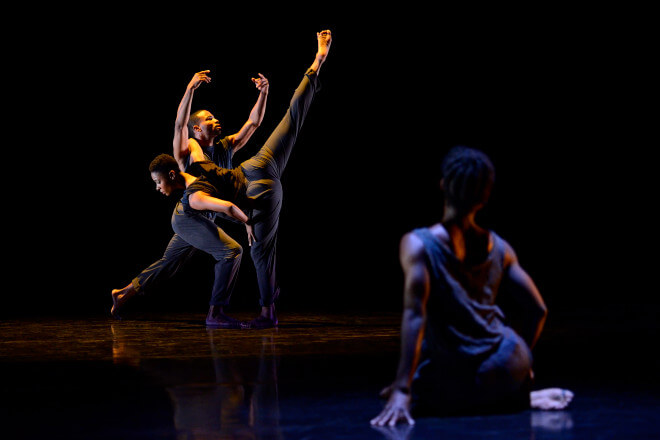 Hailed by critics and audiences alike, Canadian choreographer Aszure Barton is the founder and director of Aszure Barton & Artists. She has created works for Mikhail Baryshnikov, Alvin Ailey American Dance Theater, English National Ballet, American Ballet Theatre, Nederlands Dans Theater, National Ballet of Canada, Martha Graham Dance Company, Bayerisches Staatsballett, Sydney Dance Company, Houston Ballet, and Hubbard Street Dance Chicago, among many others. Her workshave been performed on countless international stages including Palais Garnier, The Kennedy Center, The Stanislavsky Theater, Sadler’s Wells, and Lincoln Center. Other choreography credits include the Broadway revival production of The Threepenny Opera directed by Scott Elliott (translation by Wallace Shawn and starring Cyndi Lauper, Alan Cumming, Jim Dale, Nellie Mackay, and Ana Gasteyer), film and installation projects, and international outreach activities such as Kenya’s Earth Project: Healing the Rift, at the Laikipia Nature Conservancy. Barton has been featured on the cover of Dance Magazine and her choreography has appeared in television projects, including the Sundance Channel’s Iconoclasts Series with Alice Waters and Mikhail Baryshnikov. She was the first artist-in-residence at The Baryshnikov Arts Center in 2005 and was a resident artist at The Banff Center from 2009-13. She has been proclaimed an official Ambassador of Contemporary Choreography in Canada and has received many accolades including the prestigious Arts & Letters Award, joining the ranks of Oscar Peterson, Eugene Levy, Karen Kain, and Christopher Plummer. Barton was born and raised in Alberta, Canada, and received her formal dance training at the National Ballet School, where, as a student, she helped originate the ongoing Stephen Godfrey Choreographic Showcase. She currently lives in Brooklyn and is a lover of green tea. Aszure Barton & Artists is a home for visual, sound, and performing artists and engineers, cohering in creative residencies to evoke the movement-based vision and free spirit of its founder. We seek to embrace risk and vulnerability to create work that is universal, intimate, and entertaining. Visit aszurebarton.com for more information.