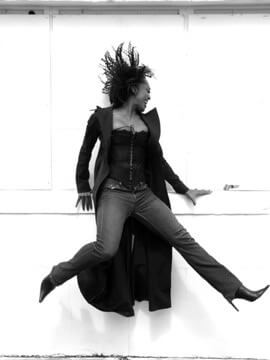 Francesca Harper is an internationally acclaimed artist. After being named Presidential Scholar in the Arts and performing at the White House, Harper performed soloist roles with the Dance Theater of Harlem and spent several years as a principal in William Forsythe’s Ballet Frankfurt. Her Broadway credits include Fosse, The Producers, All Shook Up, The Frogs and the Tony Award winning treasure The Color Purple. She was also a featured performer in Zinnias – The Life of Clementine Hunter directed by Robert Wilson, with Libretto by Civil Rights Activist Bernice Reagon. Her Principal acting roles include starring opposite Molly Ringwald in Sweet Charity and performing the role of Judith originated on Broadway by Judith Jamison in Sophisticated Ladies. Most recently she was invited to develop a new character for the show/experience Sleep No More. She sings every week at The McKittrick Hotel in Sleep No More in New York City as Jazz Vocalist, Cecilia Robertson, aka Ceci. Her TV appearances include two episodes of Boardwalk Empire, David Letterman and The Oprah Winfrey Show. Harper also served as ballet consultant for the feature film, Black Swan, by Darren Aronofsky, starring Natalie Portman, who went on to win an Oscar.  In January 2015, Harper was cast in the leading role of Amandla, in the play entitled, The CA Lyons Project, at the Alliance Theatre in Atlanta, Georgia. Harper has choreographed works for Alvin Ailey American Dance Theater, Ailey II, Tanz Graz, Hubbard Street II, Dallas Black Dance Theater, and her own company, The Francesca Harper Project, which was founded in 2005. Harper is the director of her own company, The Francesca Harper Project (FHP) which has been presented nationally and internationally. Harper is an adjunct professor at New York University, has been a resident artist at Harvard University, Associate Professor at Barnard College, and continues the vital role of teacher and choreographer for The Ailey School, Fordham University’s BFA Program and the Susan Batson Studio led by Award Winner Susan Batson. She was also the recipient of the Innovation and Technology Award for Louis Vuitton Reconstruction 3.0 for New York Fashion Week 2013 at Lincoln Center. She was honored with a Living History Award during Black History Month. For the 2016/2017 season she is remounting Creatures of Prometheus originally created for the New Jersey Symphony Orchestra, with her company the Francesca Harper project. She has also received a residency at New York University’s Ballet Center from January 2017 to May 2017 and will be creating a world premiere entitled, #yourstory.  She is also co-presenting a fashion line for fashion week in 2016 with Elias Gurrola, fellow Louis Vuitton Innovation and Technology award recipient. Her world premiere System, created for the Dance Theater of Harlem will have its debut on October 1, 2017.